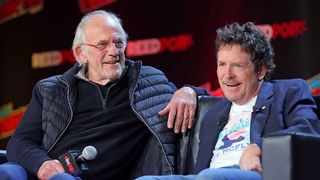 Michael J. Fox and Christopher Lloyd delighted “Back to the Future” fans when they were reunited at the weekend, 37 years after the release of the sci-fi comedy

Marty McFly and “Doc” Emmett Brown appeared together at New York Comic Con on Saturday to speak on a panel about the modern classic’s legacy.

Lloyd, documented the moving reunion by sharing a picture of the pair embracing on stage at Comic Con on his Instagram Stories. The caption read: “Thank you @newyorkcomiccon you were wonderful.”

The event made for a reunion of epic proportions and fans were blown away after footage and photos of the beloved duo began circulating online.

More about:
Back To The Future
Christopher Lloyd
Michael J Fox
Reunion