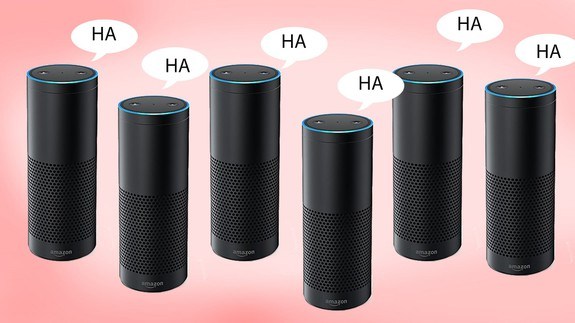 Several people who own Amazon Echo speakers have reported a strange bug: The Alexa voice assistant has been laughing for apparently no reason.
Some users on Twitter and Reddit say the outbursts have been entirely spontaneous. Others have said that Alexa has laughed after being asked to turn on the lights — and may have misheard the command.

Amazon said in a statement that the outbursts are due to its smart speakers hearing accidental orders. “In rare circumstances, Alexa can mistakenly hear the phrase ‘Alexa, laugh,’ ” Amazon said. To fix the issue, Amazon is disabling that command and changing the trigger phrase to “Alexa, can you laugh?”

Amazon is also changing Alexa’s response to that command: Rather than have the assistant laugh right away, the cackling will be preceded by the sentence, “Sure, I can laugh.”
It did not say how many people have been affected. Amazon did not say why the speaker would laugh when no one is talking.