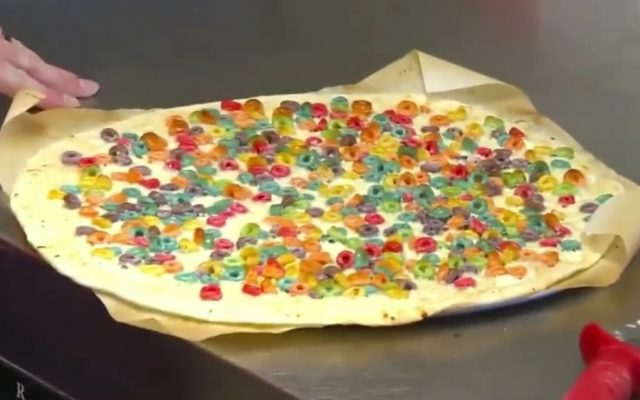 Pineapple on pizza is no longer the hotly debated pizza topic thanks to this Froot Loops pizza. Fong’s Pizza in Des Moines, Iowa has started a pizza controversy with its Loopy Fruits Breakfast Pizza. According to The Takeout, the cereal-inspired pizza consists of “pizza dough topped with cream cheese frosting, mozzarella, and Froot Loops, with a drizzle of yogurt and condensed milk.” Also, the pizza is served with a side of “sour cream and cream cheese sauce.” Although labeled a breakfast pizza, it doesn’t resemble the traditional savory ingredients like eggs, sausage, or bacon. In some ways, this Froot Loops pizza could be a dessert pizza.

Dessert pizzas featuring cereal as an ingredient can be found on other recipe sites and menus. Kellogg’s website has a pizza recipe that uses cereal as a crust with fruit toppings. Food.com has a marshmallow and cereal dessert recipe. In some ways, the Fong’s Froot Loops pizza might be controversial because it is labeled a breakfast pizza. Given all the sugary flavors, calling it a dessert pizza could have people lining up to order two pies. Whether or not Toucan Sam will be following the “flavor of fruit” to Fong’s Pizza remains to be seen. But, pineapple on pizza might not seem as outrageous as a pizza topping choice anymore.

States Ranked By Fun. Where Do You Think AK Landed?

June 19th, 2021
View full playlist
Connect With Us Listen To Us On