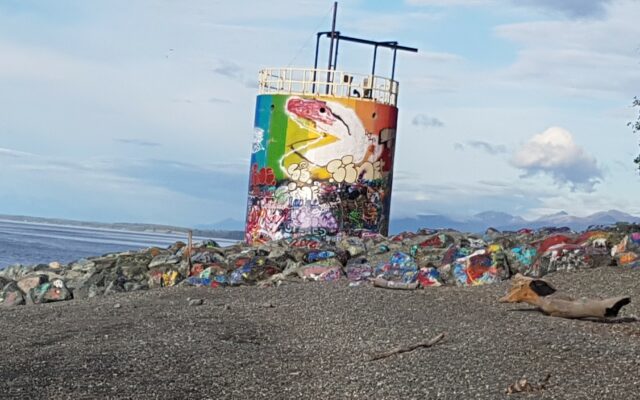 This structure and surrounding rocks are probably Anchorage's favorite spot for graffiti. But what is it??

QUESTION: What is that graffiti covered structure at Point Woronzof?

Hi, I’m Brian Ross, the newest cub at KBear, but I’ve lived in Alaska since the 90’s.

If you ever want to get out for some air and sun, I recommend you head to Point Woronzof and go down to the shoreline for a walk along the water’s edge.  There’s lots of space–I’ve never seen it crowded.  On a pretty clear day, there are some nice views. Click my pics below to see a few

But also, there are some MYSTERIES.   The cylindrical structure that’s a popular site for Anchorage’s graffiti artists– what is it?  Anytime I ask people nearby, they don’t know.  A friend of mine told me, but I think he was pulling my leg.

Is this structure still in use for…whatever?  I hear water moving within.  Is it an old, defunct part of a water system we don’t use?  Someone call Scooby and the gang to solve this.

ALSO, in my gallery, you’ll see a photo of STEEL GIRDERS but no building nearby. How did they get there?  I saw girders sticking out of the bluff a few years ago in that area.  Were they part of a structure that collapsed in the Good Friday Quake?  Or, were the just junk put there during the quake cleanup? Something else?

What do you think?  Or what do you know from your years of being a sourdough?  Send me an email at [email protected] with your info.

Thanks for tuning in middays to KBear 104.1, and for loggin’ where I’m bloggin’!

Remember My Name - Stories From The Cemetery

October 18th, 2021
View full playlist
Connect With Us Listen To Us On