Time To Vote For The Fattest! It’s Fat Bear Week! 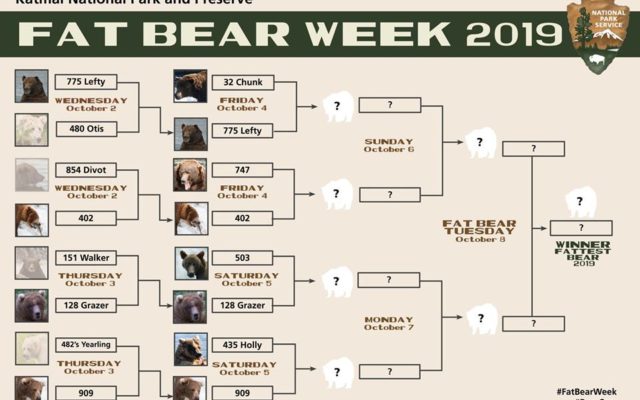 YOUR VOTE COUNTS
Katmai National Park & Preserve presents FAT BEAR WEEK!  Fat Bear Week has already started and your favorite bear can’t win without you! Just because a boar is a giant among giants, doesn’t mean that a corpulent sow can’t beat him. Don’t forget about those multitasking moms who feed their cubs AND themselves to grow into fall fatties. After fighting with siblings and fishing to their hearts content, the young tikes have eaten their way into this Olympics of obesity. They can only win with your VOTE.

Here’s how to participate in Fat Bear Week: this is a single elimination tournament to determine the 2019 fattest bear on the Brooks River. For each set of bears, vote with your “likes” or “love” for the bear you think is the fattest. Likes (votes) will be considered final at 6:00 pm AKDT on the day of the post. The most liked bear advances. Only one will be crowned the 2019 Fat Bear Week Champion!