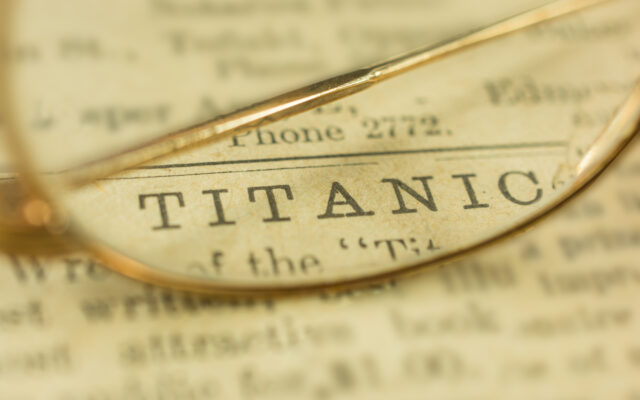 The word, Titanic, on a 1912 newspaper with antique gold glasses. The newspaper does not exist anymore and closed in the 1930's.

February 10th the biggest movie of the 90s returns to theaters. No doubt re-igniting the controversy if the floating door was indeed large enough to fit both Rose and Jack.

Speaking of the door that rose was floating on, director James Cameron has come forward with a correction. With an announcement that Cameron will be doing his own investigation he was quoted as saying, “A new investigation we’ve just done will settle this fan-based question about Jack and Rose and a piece of floating debris, which everyone calls a door. It’s, technically, not a door,” he explained, before adding, “it’s a piece of wood paneling from the first-class cabin.”

The plot thickens. Bring a box a tissues and we’ll see you at Titanic’s 25th anniversary Feb 10.