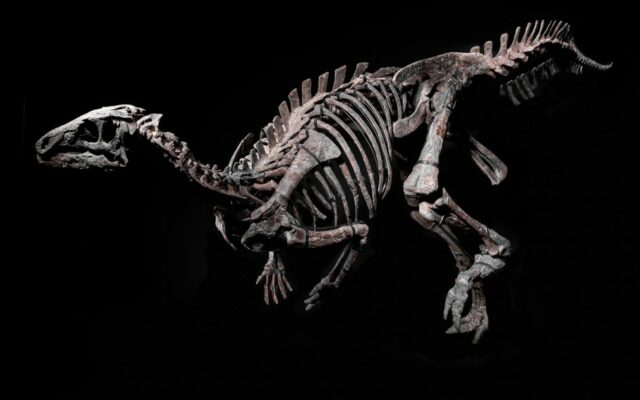 For collectors that wanted a dinosaur skeleton that would fit in their living room, you are in luck!

a 150 million-year-old dinosaur skeleton will go up for auction in Paris next month. the fossil dates back to the Upper Jurassic period and is called Zephyr — from the Greek word “Zephyros,”

Workers found it while doing road construction in Colorado.  The dino is a Iguanodon and is similar to modern iguanas.  It’s 10 feet long, 2 and a half feet wide, and 4 feet tall.

CNN says the dinosaur will go up for sale at the Hôtel Drouot, an auction venue in Paris, on October 20. Natural history enthusiasts will also have the opportunity to bid on 12 to 15 other fossils, including a just over 13-foot giant predatory fish discovered in Kansas, a nest of dinosaur eggs from France, and mammoth tusks.